Premiere CD June 24, 2022. (The first edition has already sold out, but the reissue will be ready in a week's time)

Premiere of vinyl: October 14, 2022. (The vinyls on our website have already sold out, but they are still available on www.plytygramofonowe.pl, www.winylownia.pl and www.jazzsound.pl)

The CDs purchased at this store are available with the autograph of Piotr Schmidt. In this case, please provide such information in the order form under "additional information".

The vinyl is two-color, 180g. audiophile quality, gatefold. It contains all 6 of Komeda's "unknown" pieces. A total of 42 minutes. There is a limited number of 500 hand-numbered pieces, the first 400 for the Polish market and the last 100 for the German market.

Krzysztof Balkiewicz about the history of the album:

The album was released when Komeda was already in Hollywood, working on the score to Roman Polanski’s Rosemary’s Baby. Letters between Komeda and the album’s producer Joachim-Ernst Berendt made it clear that more tracks were recorded than were finally released on the album. In one letter, Komeda asked Berendt to swap some tracks. Berendt refused, arguing that certain poems better demonstrated the album’s European character than others. And that was all that remained of the extra tracks…

It seemed that these unknown compositions were lost until, during a meticulous archival research at the National Library in Warsaw, a true treasure was found: the manuscripts of six of Komeda’s compositions from the My Sweet European Homeland project, all six the original cast-offs.

These are the six lost compositions:

Komeda, though known for a self-effacing attitude to his own artistry, called My Sweet European Homeland the best work of his life. Meanwhile, Joachim-Ernst Berendt wrote: “We have never yet had a poetry album with such beautiful, rich and emotional melodies!”. After over half a century, the unknown, hitherto missing part of Krzysztof Komeda’s My Sweet European Homeland will finally be heard by fans of the great jazz composer.

Interpreted and arranged by Piotr Schmidt, Komeda’s manuscripts have become extraordinary music, uncannily faithful to Krzysztof Komeda’s spirit. The lost set is accompanied by two compositions from the original album: Lament nad Europą and Po katastrofie, which serve to bridge the two parts of Komeda’s opus. What a wonderful homage to Krzysztof Komeda on the 90th anniversary of his birth, from Piotr Schmidt & friends. Our European homeland seems to have been waiting for this music…

Chair of the Society for the Protection of Krzysztof Komeda’s Legacy, Art Direktor of Love Polish Jazz Festival

(...)The music is everything that every Komeda fan (and therefore every Polish Jazz fan) might expect, full of brilliant melodic lines, lyricism and melancholy, which are the epitome of Polish Jazz, a big dash of tension and mystery, which characterize Komeda’s compositions and a series of brilliant performances by some of the best Polish, European and American musicians.

(...)The album has all the ingredients of an instant classic, which of course is hardly surprising.

(...) Overall, this is a monumental piece of Jazz history, a great discovery and a glorious occasion to discover another element of Komeda’s genius. Everybody involved in this project deserves my sincere thanks: the brilliant musicians, the archivist / detective, the people who brilliantly recorded the music, etc. Every true Jazz enthusiast on this planet should listen to this album, as not hearing it constitutes a big void in the ability to comprehend the European musical aesthetics.

prof. Adam Baruch, The Soundtrack Of My Life

An extraordinary musical spectacle was created, in which Komeda's thoughts resounded after many years. (...) Both the invited foreign guests and Polish musicians found themselves in this material perfectly, building their own, colorful and multidimensional music, saturated with emotions, on its foundation.

The young artist captivated the audience, and the sound of his trumpet turned out to be absolutely unique. (...) Piotr Schmidt is an extraordinary artist and the most interesting trumpeter of the young generation. His flagship album "Tribute to Tomasz Stańko" places him among the most important contenders for the legacy of the legendary trumpeter. But it also opened the way to the "golden collection" of Polish jazz and prestigious stages.

Piotr Schmidt is a jazz trumpeter and at the same time a composer, arranger with an exceptional flair for reinterpretation, a musician with a very open mind full of unusual ideas, a sonorous erudite who, at the same time, humbly refers to the musical tradition of Polish and world jazz music.

It would be hard to count all the records with Krzysztof Komeda’s music released posthumously, not to mention the new interpretations which seem to appear endlessly. And just when you start to think that this area has been fully explored, there is always a new Komeda project lurking around the corner. But the truth is the legendary Polish pianist and composer Krzysztof Komeda has released only three full LPs during his lifetime – “Ballet Etudes” (Danish Metronome, 1963), his most famous “Astigmatic” (Polish Jazz vol. 5, 1965), and „Meine Süsse Europäische Heimat” (Columbia/EMI). The latter was a jazz and poetry session produced by Joachim-Ernst Berendt in Baden-Baden in June 1967, before Komeda’s final departure for Hollywood.

The sensational news is that now, 55 years later, it came to light that Komeda had prepared for the project more compositions than just those that made it to the wax. Six unknown pieces (only sheet music) have been discovered in the archives of the National Library in Warsaw! Trumpeter Piotr Schmidt decided to record these compositions with his own arrangements, trying to capture Komeda’s original spirit. In this effort he has received support of the first-class players making up the Piotr Schmidt International Sextet. The team include the leader on trumpet, Kęstutis Vaiginis on saxophones, David Dorużka on guitar, Paweł Tomaszewski on piano, Michał Barański on bass, and Sebastian Kuchczyński on drums, with two American musicians guesting on some of the pieces: Harish Raghavan on bass and Jonathan Barber on drums. The result is the uncanny “Komeda Unknown 1967”, just released by SJR Records. 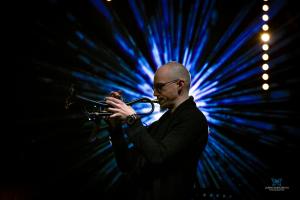